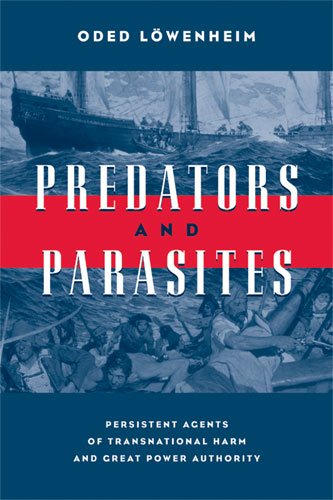 You do not have access to this book. How to get access.
What explains variance in the policy of Great Powers toward drug traffickers, pirates, and terrorists? Does counterharm policy depend just on the degree of material harm caused to a powerful state by such nonstate actors, or do normative, moral, and emotional factors also play a role? Why did the U.S., for example, harshly punish al Qaeda after 9/11 but avoid taking similar forceful measures against foreign drug traffickers who enable the deaths of thousands of Americans each year by selling highly illegal and harmful narcotics? Oded Löwenheim argues that the answers to these questions lie in the social construction of agents of harm.

"Predators and Parasites shows, with impressive scholarship, that world politics is characterized by a cartel-like structure that gives states monopolies of legitimate violence. Sovereignty and a global structure of authority are not mutually exclusive. In a sense, anarchy is in the eye of the beholder."

"An invaluable contribution to the growing body of constructivist literature in international relations and should be read by anyone interested in the use of force in contemporary global politics . . . Goes a long way toward explaining America's War on Terror against al Qaeda and the Taliban and the widespread global support for this policy, as well as the highly negative global reaction to America's own intervention in Iraq and its norm-threatening doctrine of preemption."

"Prepare to be boarded! Löwenheim delivers an essential constructivist tutorial on Great Power sovereignty and authority. An intellectual swashbuckler!"

Oded Löwenheim is Lecturer in the Department of International Relations at the Hebrew University of Jerusalem.