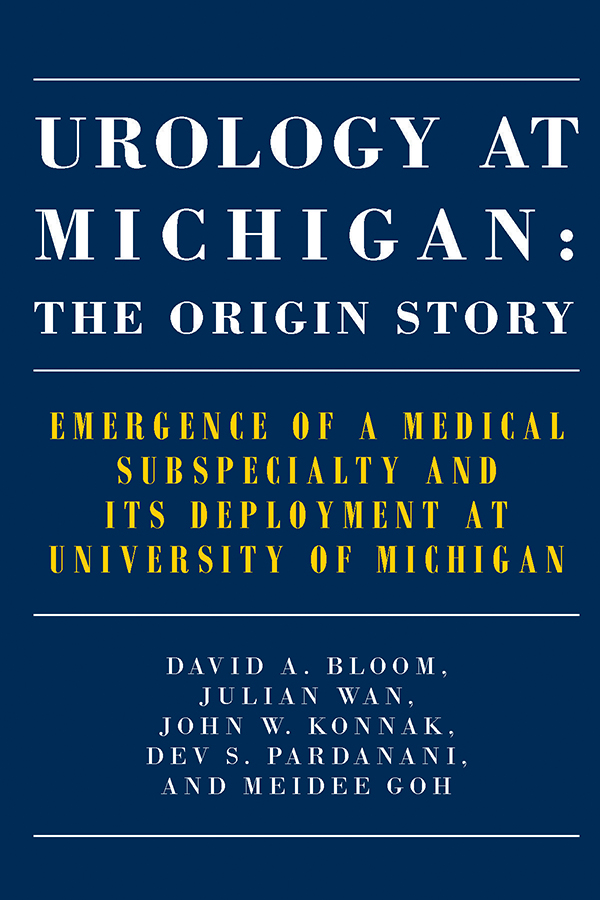 Urology at Michigan: The Origin Story: Emergence of a Medical Subspecialty and Its Deployment at University of Michigan

© Regents of the University of Michigan

Open Access
This book describes the emergence of a small but essential medical specialty, urology, at one of the first American public institutions of higher education, the University of Michigan. Urology at Michigan: The Origin Story, a microcosm of the modern world of healthcare specialization, entwines many stories beginning with its earliest roots, diagnostic uroscopy and the primitive interventions of catheterization and lithotomy. The Hippocratic Oath forbade its generalist healers from only three practices – abortion, euthanasia, and lithotomy, relegating the last to specialists “in that art,” namely itinerant lithotomists of whom little record remains. Over two and a half millennia since Hippocrates, catheterization, lithotomy, and genitourinary surgery in general advanced only modestly until products of the industrial revolution and scientific inquiry provided the tools and knowledge that accelerated the ancient genitourinary work into a new discipline of urology around the fin de siècle of the 19th century, just as the University of Michigan concurrently was joining the top rank of higher education.

The University of Michigan in the early 20th century was nearly a century old and contained a medical school and wholly-owned University Hospital, the first of that genre. Ann Arbor was a propitious place for modern urology to take hold when Hugh Cabot brought not just the new terminology, but also the complete triple mission with urologic education and research embedded in a milieu of world-class clinical care. Cabot arrived in Ann Arbor from Boston in the autumn of 1919, imbued with more than two years’ service in WWI with the British Expeditionary Forces on the Western Front, and he became Dean of the Medical School in 1921. Cabot expanded the full-time salary model in the medical school, supervised construction of Ann Arbor’s 4th iteration of the University Hospital, but its first state-of the art facility. He created a multi-specialty academic group practice and assembled a great faculty with future leaders in surgery including Frederick Coller, Max Peet, Carl Badgley, and John Alexander. Cabot’s first trainees to become urologists were Charles Huggins, a future Nobel Laureate, and Reed Nesbit who rose to the top ranks of academic and organizational urology and made Ann Arbor an international clinical and educational destination. This book tells the story of urology at Michigan amidst the larger stories of the roots of genitourinary surgery, the formation of the University of Michigan and its Medical School, and the inevitable tensions of balancing the triple mission of medical academia: education and investigation within a milieu of the essential transaction of excellent clinical care.