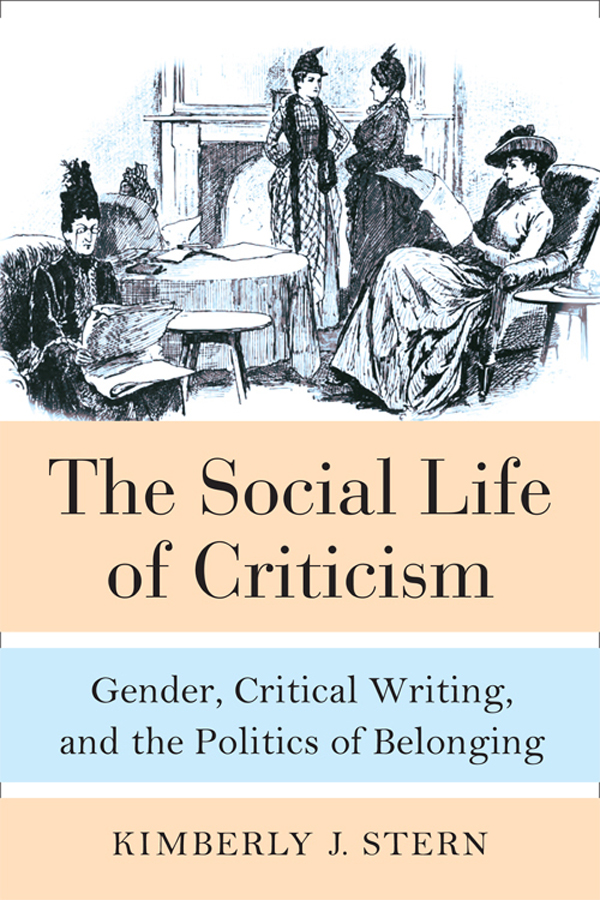 The Social Life of Criticism: Gender, Critical Writing, and the Politics of Belonging

You do not have access to this book. How to get access.
The Social Life of Criticism explores the cultural representation of the female critic in Victorian Britain, focusing especially on how women writers imagined themselves—in literary essays, periodical reviews, and even works of fiction—as participants in complex networks of literary exchange. Kimberly Stern proposes that in response to the "male collectivity" prominently featured in critical writings, female critics adopted a social and sociological understanding of the profession, often reimagining the professional networks and communities they were so eager to join.

This engaging study begins by looking at the eighteenth century, when critical writing started to assume the institutional and generic structures we associate with it today, and examines a series of case studies that illuminate how women writers engaged with the forms of intellectual sociability that defined nineteenth-century criticism—including critical dialogue, the club, the salon, and the publishing firm. In doing so, it clarifies the fascinating rhetorical and political debates surrounding the figure of the female critic and charts how women writers worked both within and against professional communities. Ultimately, Stern contends that gender was a formative influence on critical practice from the very beginning, presenting the history of criticism as a history of gender politics.

While firmly grounded in literary studies_, The Social Life of Criticism_ combines an attention to historical context with a deep investment in feminist scholarship, social theory, and print culture. The book promises to be of interest not only to professional academics and graduate students in nineteenth-century literature but also to scholars in a wide range of disciplines, including literature, intellectual history, cultural studies, gender theory, and sociology.