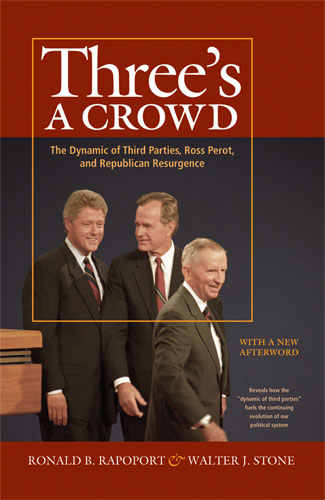 Three's a Crowd: The Dynamic of Third Parties, Ross Perot, and Republican Resurgence

You do not have access to this book. How to get access.
"A significant contribution to our understanding of minor parties and party system change. The authors develop a new theory and provide strong empirical evidence in support of it. They show that the Perot's candidacy has had a strong and lasting impact on partisan competition in elections.

"Powerfully persuasive in its exhaustive research, Three's a Crowd may surprise many by revealing the long- ignored but pivotal impact of Perot voters on every national election since 1992."

---Clay Mulford, Jones Day and General Counsel to the 1992 Perot Presidential Campaign and to the Reform Party.

"Rapaport and Stone have written an engaging and important book. They bring fresh perspectives, interesting data, and much good sense to this project. Three's a Crowd is fundamentally about political change, which will, in turn, change how scholars and pundits think of Ross Perot in particular, and third parties in general."

---John G. Geer, Professor of Political Science at Vanderbilt University and Editor of The Journal of Politics

"The definitive analysis of the Perot movement, its role in the 1994 GOP victory, and the emergence of an enduring governing majority."

Three's a Crowd begins with the simple insight that third parties are creatures of the American two-party system, and derive their support from the failures of the Democratic and Republican parties.

The Perot campaign exemplified this effect in 1992 and 1996. Political observers of contemporary electoral politics missed the significance of Perot's independent campaign for the presidency in 1992. Rapoport and Stone, who had unfettered-and unparalleled-access to the Perot political machine, show how his run perfectly embodies the third-party dynamic. Yet until now no one has considered the aftermath of the Perot movement through that lens.

For anyone who seeks to understand the workings of our stubbornly two-party structure, this eagerly awaited and definitive analysis will shed new light on the role of third parties in the American political system.