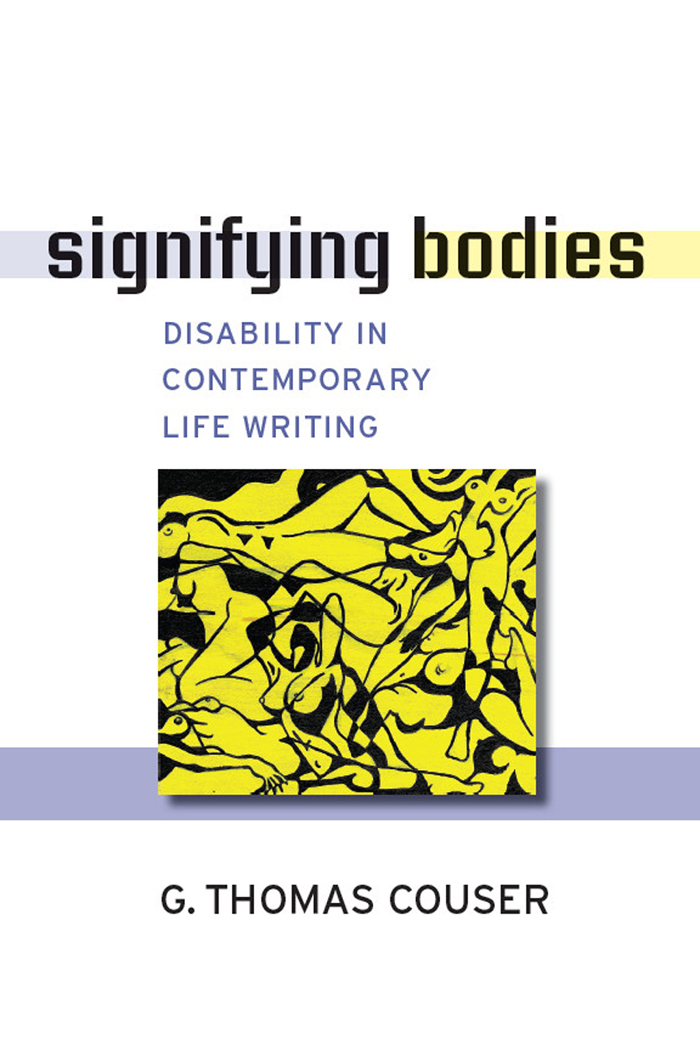 G. Thomas Couser 2009
"Thomas Couser's Signifying Bodies comes at a crucial moment when debates about physician assisted suicide, genetic engineering, and neo-natal screening are raising the question of what constitutes a 'life worth living' for persons with disabilities. Couser's work engages these debates by exploring the extensive number of personal narratives by or about persons with disabilities. As Couser brilliantly demonstrates through synoptic readings, these works challenge the 'preferred rhetorics' by which such narratives are usually written (triumphalist, gothic, nostalgic) while making visible the variegated nature of embodied life."

"Signifying Bodies shows us that life writing about disability is . . . everywhere. . . . From obituary to documentary film to ethnography to literary memoir to the law, the book casts a wide net, detailing how various written and filmed responses to disability both enact and resist conventional narrative patterns. [This] not only broadens our idea about where to look for life writing, but also demonstrates how thoroughly stereotypes about disability mediate our social and artistic languages---even when an author has (so-called) the best intentions."

Memoirs have enjoyed great popularity in recent years, experiencing significant sales, prominent reviews, and diverse readerships. Signifying Bodies shows that at the heart of the memoir phenomenon is our fascination with writing that focuses on what it means to live in, or be, an anomalous body---in other words, what it means to be disabled. Previous literary accounts of the disabled body have often portrayed it as a stable entity possibly signifying moral deviance or divine disfavor, but contemporary writers with disabilities are defining themselves and depicting their bodies in new ways. Using the insights of disability studies and source material ranging from the Old and New Testaments to the works of authors like Lucy Grealy and Simi Linton and including contemporary films such as Million Dollar Baby, G. Thomas Couser sheds light on a broader cultural phenomenon, exploring topics such as the ethical issues involved in disability memoirs, the rhetorical patterns they frequently employ, and the complex relationship between disability narrative and disability law.

G. Thomas Couser is Professor of English at Hofstra University.