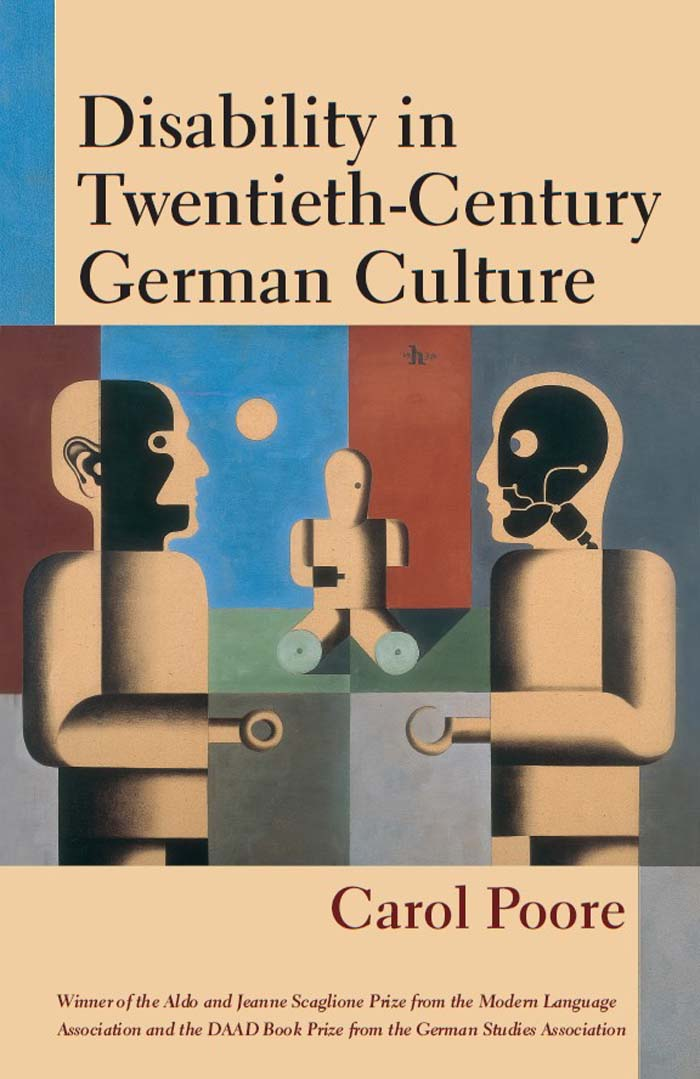 You do not have access to this book. How to get access.
"Comprehensively researched, abundantly illustrated and written in accessible and engaging prose . . .  With great skill, Poore weaves diverse types of evidence, including historical sources, art, literature, journalism, film, philosophy, and personal narratives into a tapestry which illuminates the cultural, political, and economic processes responsible for the marginalization, stigmatization, even elimination, of disabled people---as well as their recent emancipation."

"A major, long-awaited book. The chapter on Nazi images is brilliant---certainly the best that has been written in this arena by any scholar."

"An important and pathbreaking book . . . immensely interesting, it will appeal not only to students of twentieth-century Germany but to all those interested in the growing field of disability studies."

Disability in Twentieth-Century German Culture covers the entire scope of Germany's most tragic and tumultuous century---from the Weimar Republic to the current administration---revealing how central the notion of disability is to modern German cultural history. By examining a wide range of literary and visual depictions of disability, Carol Poore explores the contradictions of a nation renowned for its social services programs yet notorious for its history of compulsory sterilization and eugenic dogma. This comprehensive volume focuses particular attention on the horrors of the Nazi era, when those with disabilities were considered "unworthy of life," but also investigates other previously overlooked topics including the exile community's response to disability, socialism and disability in East Germany, current bioethical debates, and the rise and gains of Germany's disability rights movement.

Richly illustrated, wide-ranging, and accessible, Disability in Twentieth-Century German Culture gives all those interested in disability studies, German studies, visual culture, Nazi history, and bioethics the opportunity to explore controversial questions of individuality, normalcy, citizenship, and morality. The book concludes with a memoir of the author's experiences in Germany as a person with a disability.

Carol Poore is Professor of German Studies at Brown University.

A volume in the series Corporealities: Discourses of Disability