You don't have access to this book. Please try to log in with your institution. Log in
Read Book Buy Book
"Reading this book is certainly a vigorous experience. Kalb's sense of nuance, unpredictability, and the complexity of perception brings these productions to life. He is our surrogate, our scapegoat even, enduring the length of these productions so that he can convey the essence of their power."

"Jonathan Kalb takes us on a tour of monumental theater events, which flaunt the rules of economy, Aristotelian and otherwise. Kalb captures these unwieldy marathon productions by skillfully mixing personal experience and scholarly analysis. I read this engaging book in a single sitting---and came away ready to join the first theater marathon I could find."

"Jonathan Kalb's Great Lengths leaps to the head of any class in theatre history. Rich with critical perspective of 'marathon' works by Peter Brook, Tony Kushner, Robert Wilson, and others, and written with panache and lucidity, Kalb's book is filled with suspense as he describes and demystifies more than the post-modern and post-dramatic haunting recent theatre. This is history as present event, embracing the Greeks, Shakespeare, and even Charles Dickens."

We know that size matters in many areas of human endeavor, but what about works of the imagination? Why do some dramatic creations extend to five hours or more, and how does their extreme length help them accomplish extraordinarily ambitious aims? In Great Lengths, theater critic and scholar Jonathan Kalb addresses these and other questions through a close look at seven internationally prominent theater productions, including Tony Kushner's Angels in America, Robert Wilson's Einstein on the Beach, and the Royal Shakespeare Company's Nicholas Nickleby, and the "durational works" of the British experimental company Forced Entertainment. This is a book about extreme length, monumental scope, and intensive immersion in the theater in general, written by a passionate spectator reflecting on selected pinnacles of his theatergoing over thirty years.

The book's examples, deliberately chosen for their diversity, range from adapted novels and epics, to dramatic chronicles with macrohistorical and macropolitical implications, to stagings of super-size classic plays, to "postdramatic" works that negotiate the border between life and art. Kalb reconstructs each of the works, re-creating the experience of seeing it while at the same time explaining how it maintained attention and interest over so many hours, and then expanding the scope to embrace a wider view and ask broader questions. The discussion of Nicholas Nickleby, for example, considers melodrama as a basic tool of theatrical communication, and the section on Peter Brook's The Mahabharata explores the ethical problems surrounding theatrical exoticism. The chapter on Einstein on the Beach grows into a reflection on the media-age status of the much-debated Gesamtkunstwerk (or "total artwork") and a reassessment of the long avant-gardist tradition of challenging the primacy of rational language in theater. The essay on Peter Stein's Faust I + II becomes a reflection on the interpretive role of theater directors and the theatrical viability of antitheatrical closet drama. Great Lengths thus offers a remarkable panorama of the surprisingly broad field of contemporary marathon theater---an art form that diverse audiences of savvy, screen-weaned spectators continue to seek out, for the increasingly rare experiences of awe, transcendence, and sustained immersion that it provides.

Great Lengths will appeal to general readers as well as theater specialists. It situates the chosen productions in various historical and critical contexts and engages with the many lively scholarly debates that have swirled around them. At the sam 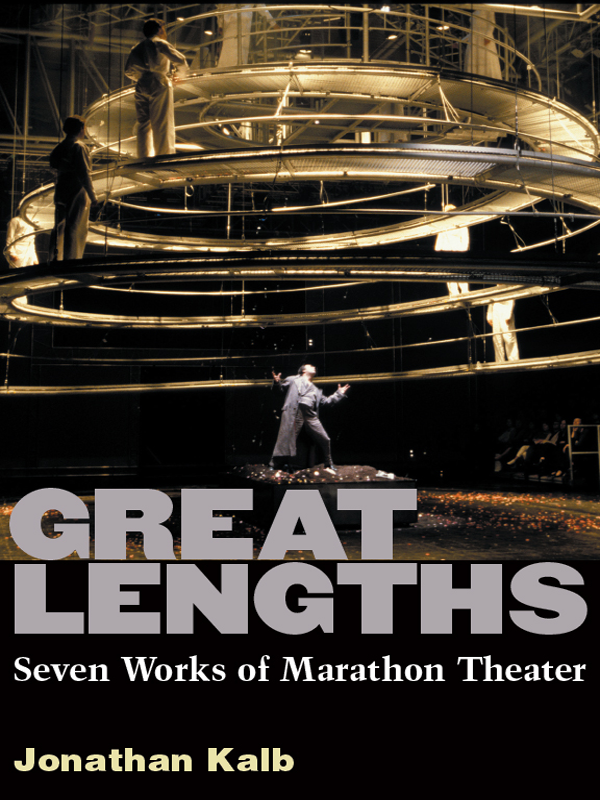