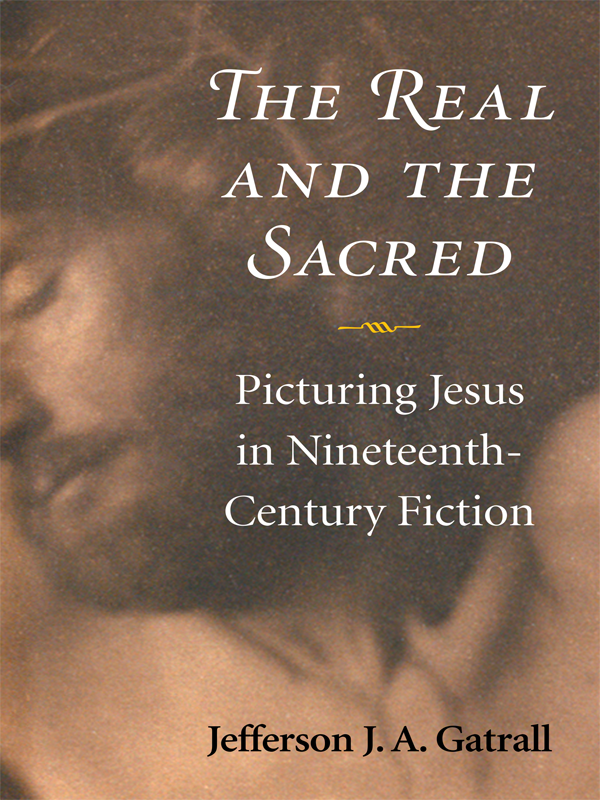 The Real and the Sacred: Picturing Jesus in Nineteenth-Century Fiction

Jefferson J. A. Gatrall 2014
The figure of Jesus appears as a character in dozens of nineteenth-century novels, including works by Balzac, Flaubert, Dickens, Dostoevsky, and others. The Real and the Sacred focuses in particular on two fiction genres: the Jesus redivivus tale and the Jesus novel. In the former, Christ makes surprise visits to earth, from rural Flanders (Balzac) and Muscovy (Turgenev) to the bustling streets of Paris (Flaubert), Seville (Dostoevsky), Berlin, and Boston. In the latter, the historical Jesus wanders through the picturesque towns and plains of first-century Galilee and Judea, attracting followers and enemies. In short, authors subjected Christ, the second person of the Christian trinity, to the realist norms of secular fiction. Thus the Jesus of nineteenth-century fiction was both situated within a specific time and place, whether ancient or modern, and positioned before the gaze of increasingly daring literary portraitists. The highest artistic challenge for authors was to paint, using mere words, a faithful picture of Jesus in all his humanity. The incongruity of a sacred figure inhabiting secular literary forms nevertheless tested the limits of modern realist style no less than the doctrine of Christ's divinity.

The international "quest of the historical Jesus" has been amply documented within the context of nineteenth-century biblical scholarship. Yet there has been no broad-based comparative study devoted to the depiction of Jesus in prose fiction over the same time period. The Real and the Sacred offers a comprehensive survey of this body of fiction, examining both the range of its Christ types and the varying formal means through which these types were represented. The nineteenth century—despite forecasts of God's death at the time—not only revived older Christ types but also witnessed the rise of new ones, including le Christ proletaire, the Mormon Christ, the Buddhist Christ, and the Tolstoyan Christ. Novelists played a crucial role in the invention and popularization of the historical Jesus in particular, one of modernity's major figures.

These pioneering works of fiction, written by authors of diverse religious and national backgrounds, laid the formal groundwork for an enduring fascination with the historical Jesus in later fiction and film, from Mikhail Bulgakov's Master and Margarita to Mel Gibson's The Passion of the Christ. The book is enhanced by a gallery of illustrations of the historical Jesus as depicted by nineteenth-century artists.