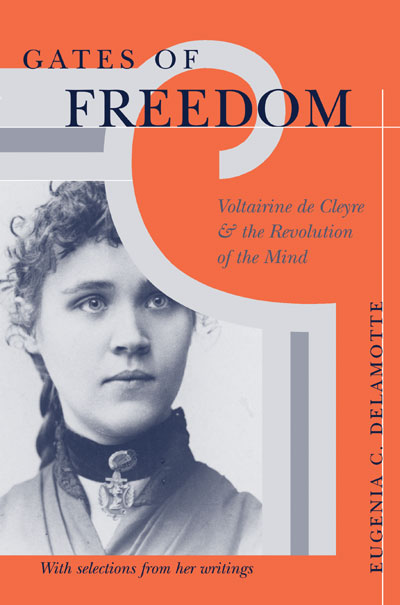 Gates of Freedom: Voltairine de Cleyre and the Revolution of the Mind

You do not have access to this book. How to get access.
"The time is surely right to draw attention to Voltairine de Cleyre, one of the most uncompromisingly revolutionary of all American women writers . . . [Gates of Freedom] gives a fine selection of de Cleyre's work, while articulating it to contemporary critical and cultural concerns . . . . The book's organization, its tendency to tackle the most difficult issues head on, and its careful selection of published and unpublished work are all superb."

"The question of souls is old; we demand our bodies, now." These words are not from a feminist manifesto of the late twentieth century, but from a fiery speech given a hundred years earlier by Voltairine de Cleyre, a leading anarchist and radical thinker. A contemporary of Emma Goldman---who called her "the most gifted and brilliant anarchist woman America ever produced"---de Cleyre was a significant force in a major social movement that sought to transform American society and culture at its root. But she belongs to a group of late-nineteenth-century freethinkers, anarchists, and sex-radicals whose writing continues to be excluded from the U.S. literary and historical canon.

Gates of Freedom considers de Cleyre's speeches, letters, and essays, including her most well known essay, "Sex Slavery." Part I brings current critical concerns to bear on de Cleyre's writings, exploring her contributions to the anarchist movement, her analyses of justice and violence, and her views on women, sexuality, and the body. Eugenia DeLamotte demonstrates both de Cleyre's literary significance and the importance of her work to feminist theory, women's studies, literary and cultural studies, U.S. history, and contemporary social and cultural analysis. Part II presents a thematically organized selection of de Cleyre's stirring writings, making Gates of Freedom appealing to scholars, students, and anyone interested in Voltairine de Cleyre's fascinating life and rousing work.