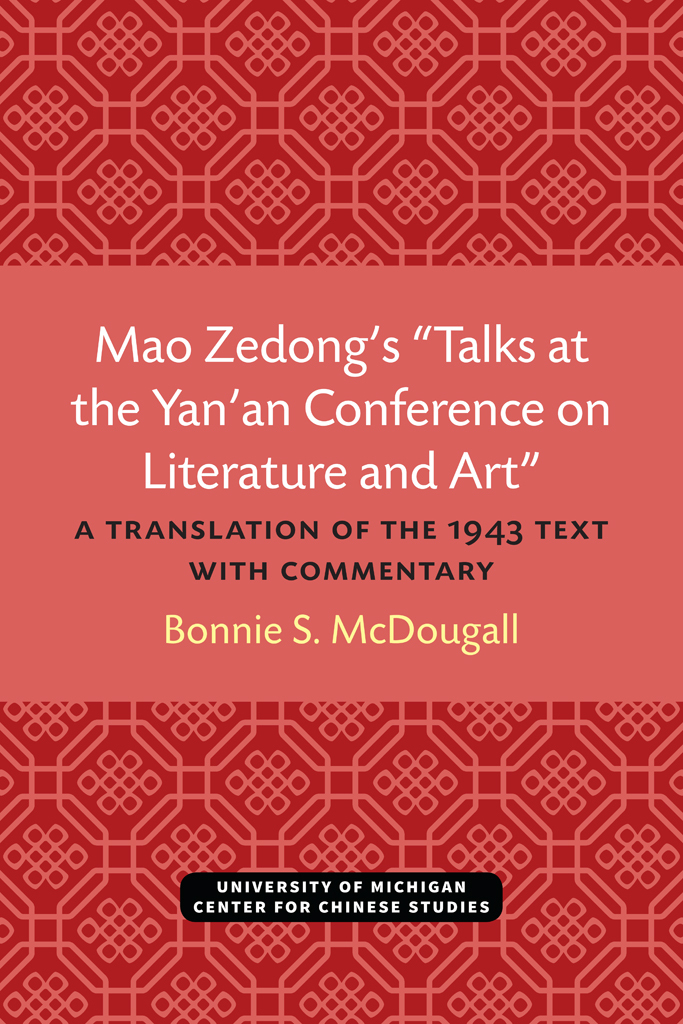 Mao Zedong's "Talks at the Yan'an Conference on Literature and Art": A Translation of the 1943 Text with Commentary

OPEN ACCESS
The writings of Mao Zedong have been circulated throughout the world more widely, perhaps, than those of any other single person this century. The "Talks at the Yan'an Conference on Literature and Art" has occupied a prominent position among his many works and has been the subject of intense scrutiny both within and outside China. This text has undoubted importance to modern Chinese literature and history. In particular, it reveals Mao's views on such questions as the relationship between writers or works of literature and their audience, or the nature and value of different kinds of literary products.

In this translation and commentary, Bonnie S. McDougall finds that Mao was in fact ahead of many of his critics in the West and his Chinese contemporaries in his discussion of literary issues. Unlike the majority of modern Chinese writers deeply influenced by Western theories of literature and society (including Marxism), Mao remained close to traditional patterns of thought and avoided the often mechanical or narrowly literal interpretations that were the hallmark of Western schools current in China in the early twentieth century.

Many of the detailed discussions on the "Talks" in the West have been concerned with their political and historical significance. However, since Mao is a literary figure of some importance in twentieth-century China, McDougall finds it worthwhile to follow up his published remarks on the nature and source of literature and the means of its evaluation. By better understanding the complex and revolutionary ideas contained in the "Talks," McDougall suggests we may acquire the necessary analytical tools for a more fruitful investigation into contemporary Chinese literature.

19 views since May 14, 2020
x This site requires cookies to function correctly.