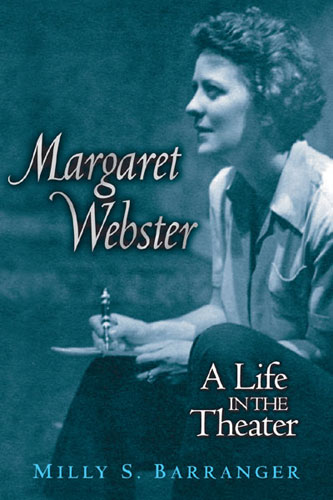 Margaret Webster: A Life in the Theater

You do not have access to this book. How to get access.
"In Milly Barranger, Margaret Webster has found the perfect biographer. In Margaret Webster, Milly Barranger has found her perfect subject. She brings to vivid life a fascinating and important theater figure whose public and private lives were of equal interest. In this carefully researched book, Webster's colleagues, lovers, and friends shine as brightly as she did. I wish she were here to read it."

"Margaret Webster is a highly welcome addition to our knowledge of the first important female director in American theater. Remembered now especially for her staging of Othello with Paul Robeson, Uta Hagen, and Jose Ferrer, Margaret Webster was probably the best-known, in-demand, and admired director of Shakespeare in America in the 1940s and 1950s. Fascinating throughout, the book's discussions of working with Robeson, and of HUAC, which targeted her just as her career was reaching a peak, make for especially engrossing reading."

This is the first book-length biography of Webster, a groundbreaking stage and opera director whose career challenged not only stage tradition but also mainstream attitudes toward professional women.

Often credited with first having brought Shakespeare to Broadway, and renowned for her bold casting of an African American (Paul Robeson) in the role of Othello, Webster was a creative force in modern American and British theater.

Her story reveals the independent-minded artist undeterred by stage tradition and unmindful of rules about a woman's place in the professional theater. In addition to providing fascinating glimpses into Webster's personal and family life, Margaret Webster: A Life in the Theater also offers a who's-who list of the biggest names in New York and London theater of the time, as well as Hollywood: John Gielgud, Noël Coward, George Bernard Shaw, Uta Hagen, Sybil Thorndike, Eva LeGallienne, and John Barrymore, among others, all of whom crossed paths with Webster. Capping Webster's amazing story is her investigation by Senator Joseph McCarthy and HUAC, which left her unable to work for a year, and from which she never fully recovered.