Open Access
Read Book Buy Book
As German Jews emigrated in the nineteenth and early twentieth centuries and as exiles from Nazi Germany, they carried the traditions, culture, and particular prejudices of their home with them. At the same time, Germany—and Berlin in particular—attracted both secular and religious Jewish scholars from eastern Europe. They engaged in vital intellectual exchange with German Jewry, although their cultural and religious practices differed greatly, and they absorbed many cultural practices that they brought back to Warsaw or took with them to New York and Tel Aviv. After the Holocaust, German Jews and non-German Jews educated in Germany were forced to reevaluate their essential relationship with Germany and Germanness as well as their notions of Jewish life outside of Germany.

Among the first volumes to focus on German-Jewish transnationalism, this interdisciplinary collection spans the fields of history, literature, film, theater, architecture, philosophy, and theology as it examines the lives of significant emigrants. The individuals whose stories are reevaluated include German Jews Ernst Lubitsch, David Einhorn, and Gershom Scholem, the architect Fritz Nathan and filmmaker Helmar Lerski; and eastern European Jews David Bergelson, Der Nister, Jacob Katz, Joseph Soloveitchik, and Abraham Joshua Heschel—figures not normally associated with Germany. Three-Way Street addresses the gap in the scholarly literature as it opens up critical ways of approaching Jewish culture not only in Germany, but also in other locations, from the mid-nineteenth century to the present.
This open access version made available with the support of libraries participating in Knowledge Unlatched. 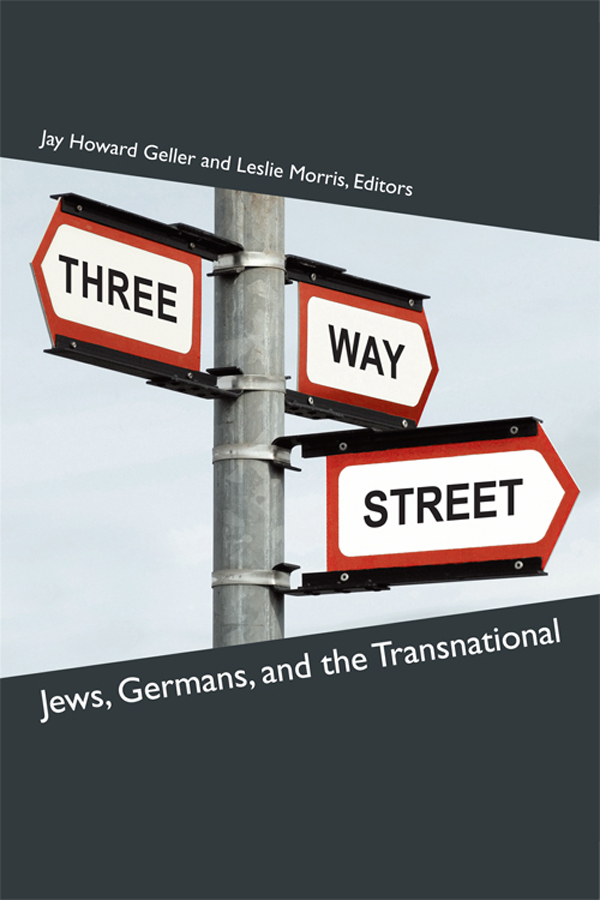