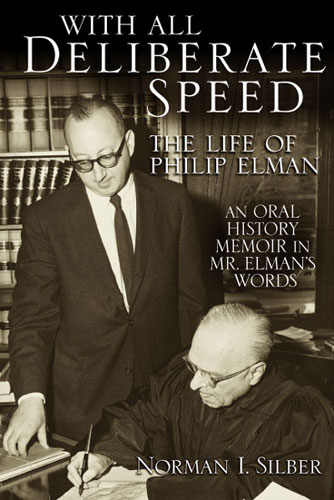 With All Deliberate Speed: The Life of Philip Elman

You do not have access to this book. How to get access.
"With All Deliberate Speed is just wonderful. It gives the reader fascinating insights into the Roosevelt era, the Supreme Court, the Justice Department. It is funny, and endearingly human. Three cheers!"

"The fascinating, eloquent, and skillfully edited oral memoir of a distinguished public servant, who was at the epicenter of major legal controversies that his memoir illuminates. A major contribution to modern American legal history."

"With All Deliberate Speed provides an insider's rich account, spanning over thirty years, of the inner workings of the Supreme Court, the Solicitor General's Office and the Federal Trade Commission that anyone seriously interested in a frank behind-the-scenes view of the federal government should find exceptionally provocative and intriguing"

From a modest childhood in Patterson, N. J., Philip Elman rose to become clerk for the great Supreme Court Justice Felix Frankfurter, and then to a position in the U.S. Solicitor General's Office. As a member of that office, Philip Elman had an exceptional vantage point on one of the most momentous cases in U.S. Supreme Court history: Brown v. Board of Education.

In this oral history memoir of Elman's life, With All Deliberate Speed, author Norman I. Silber reveals the maneuvering that led to the Court's overturning the doctrine of "separate but equal." Working behind the scenes, it was Justice Department attorney Elman who came up with the concept of gradual integration-an idea that worked its way into the final decision as the famous phrase "with all deliberate speed." Though this expression angered those pressing for immediate desegregation, Elman claims that it unified a divided Court, thus enabling them to stand together against the evil of segregation.

With All Deliberate Speed records a decisive moment in Supreme Court history, but it is also Philip Elman's unforgettable oral memoir-the story of his entire career in government service, including his work with Attorney General Robert F. Kennedy as commissioner of the FTC, and his role in founding the modern consumer protection movement, which includes the antismoking campaign that put the Surgeon General's warning on cigarette packs.

At once rich historical testimony and a gripping read, With All Deliberate Speed offers a rarely glimpsed insider's understanding of the politics of the American legal system.