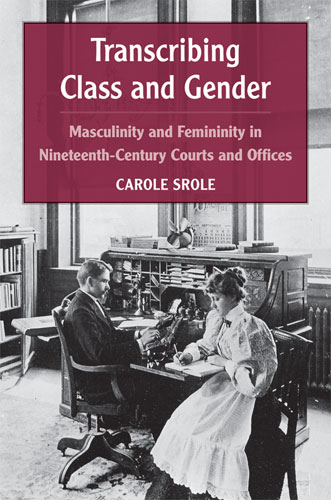 Transcribing Class and Gender: Masculinity and Femininity in Nineteenth-Century Courts and Offices

You do not have access to this book. How to get access.
"Drawing upon census data, trade periodicals devoted to stenography and court reporting, the writings of educational reformers, and fiction, Srole allows us to better understand the roles that gender and work played in the formation of middle-class identity. Clearly written and thoroughly researched, her book reminds us of the contradictions that both men and women faced as they navigated changes in the labor market and sought to realize a modern professional identity."

Transcribing Class and Gender explores the changing meanings of clerical work in nineteenth-century America, focusing on the discourse surrounding that work. At a time when shorthand transcription was the primary method of documenting business and legal communications and transactions, most stenographers were men, but changing technology saw the emergence of women in the once male-dominated field. Carole Srole argues that this shift placed stenographers in a unique position to construct a new image of the professional man and woman and, in doing so, to redefine middle- and working-class identities.

Many male court reporters emphasized their professionalism, portraying themselves as educated language experts as a way to elevate themselves above the growing numbers of female and working-class stenographers and typewriter operators. Meanwhile, women in the courts and offices were confronting the derogatory image of the so-called Typewriter Girl who cared more about her looks, clothing, and marriage prospects than her job. Like males in the field, women responded by fashioning a gendered professional image---one that served to combat this new version of degraded female labor while also maintaining traditional ideals of femininity.

The study is unique in the way it reads and analyzes popular fiction, stenography trade magazines, the archives of professional associations, and writings by educational reformers to provide new perspectives on this history. The author challenges the common assumption that men and women clerks had separate work cultures and demonstrates how each had to balance elements of manhood and womanhood in the drive toward professionalism and the construction of a new middle-class image. Transcribing Class and Gender joins the recent scholarship that employs cultural studies approaches to class and gender without abandoning the social history valuation of workers' experiences.

Photo: A female stenographer working for an actuary in 1897. Courtesy Metlife Archives.