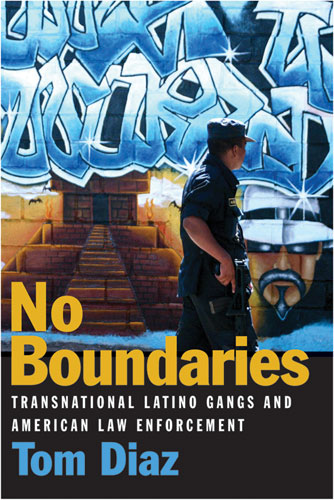 You do not have access to this book. How to get access.
"Tom Diaz has worn out some shoe leather, much like a good detective, in gathering facts, not myths or urban legends. As a result he has produced an accurate and comprehensive look at a grave and present danger to our society."

---From the foreword by Chris Swecker, former Assistant Director of the FBI and former head of the FBI's Criminal Investigative Division

No Boundaries is a disturbing account of what many consider the "next Mafia"---Latino crime gangs. Like the Mafia, these gangs operate an international network, consider violence a routine matter, and defy U.S. law enforcement at every level. Also, the gangs spawn kingpins such as the notorious Nelson Martinez Varela Comandari, who nearly became the first "Latin godfather" in the United States.

Focusing on the Los Angeles–based Mara Salvatrucha (MS-13) and the 18th Street Gang, and the Chicago-based Latin Kings, Tom Diaz describes how neighborhood gangs evolved into extremely brutal, sophisticated criminal enterprises and how local and federal authorities have struggled to suppress them. As he makes clear, the problem of transnational Latino gangs involves complex national and international issues, such as racial tensions, immigration policy, conflict in Latin America, and world economic pressures.

Tom Diaz is a lawyer, author, and public speaker who conducts research on gun policy and violence for the Violence Policy Center, a Washington, D.C.–based think tank. He has covered national security affairs for the Washington Times and served as counsel to the U.S. House Subcommittee on Crime and Criminal Justice from 1993 to 1997.

Cover photograph: Tegucigalpa, Honduras: A policeman passes by a graffiti of the Mara Salvatrucha "MS-13" (juvenile gang) at the entrance of the unit where members of the gang are kept imprisoned in the National Penitentiary in Tamara, 30 km north of Tegucigalpa, February 1, 2006. © Elmer Martinez/AFP/Getty Images