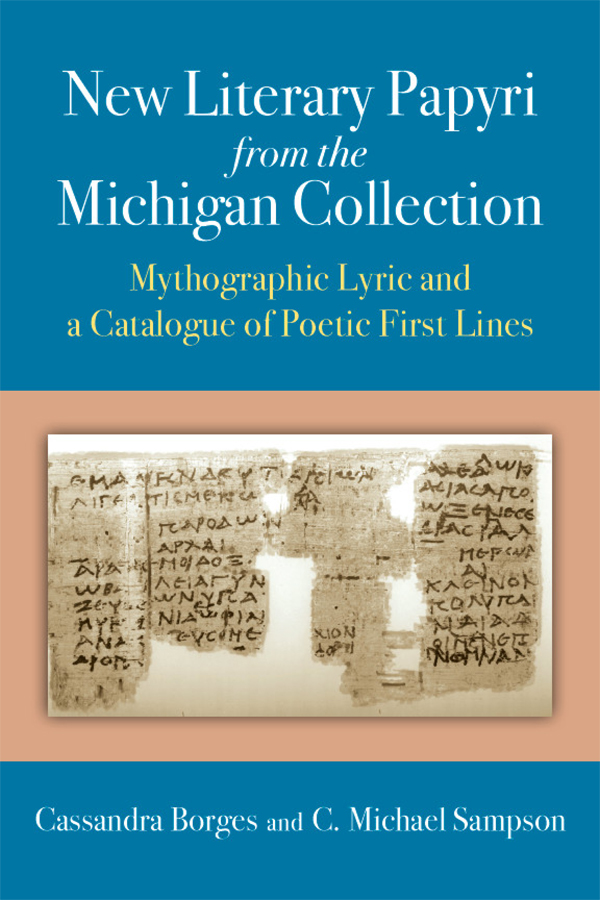 New Literary Papyri from the Michigan Collection: Mythographic Lyric and a Catalogue of Poetic First Lines

You do not have access to this book. How to get access.
New texts from Greek antiquity continue to emerge on scraps of papyrus from the sands of Egypt, not only adding to the surviving corpus of classical and Hellenistic literature, but also occasionally offering a glimpse into how these poems were studied in antiquity. New Literary Papyri from the Michigan Collection: Mythographic Lyric and a Catalogue of Poetic First Lines presents three such new texts: an innovative lyric poem on the Trojan cycle, a scholarly anthology of lyric verses, and a brief but enigmatic third text. Cassandra Borges and C. Michael Sampson offer the original Greek text of these pieces, along with their scholarly commentary, analyzing their features in a variety of contexts—historical, cultural, poetic, mythological, religious, and scholarly.

The fragments collected here are of considerable antiquity (late third to second century BCE) a fact that is significant inasmuch as it places them among the oldest Greek papyri, but all the more so because in this period, a scholarly community was thriving in Ptolemaic Alexandria, the political and cultural capital of Hellenistic Egypt. The fragments bear witness to that scholarly activity: not only is their anthology of poetic verses consistent with other scholarly selections, but the very survival of these texts may well be at least partially indebted to the work of the Alexandrians in studying and propagating Greek literature in Egypt.

This edition supplements the 1970s work of Reinhold Merkelbach and Denys Page. Recent digitizing for the APIS project revealed a previously unsuspected join with other material, however, which alone warrants a new, comprehensive edition and analysis.