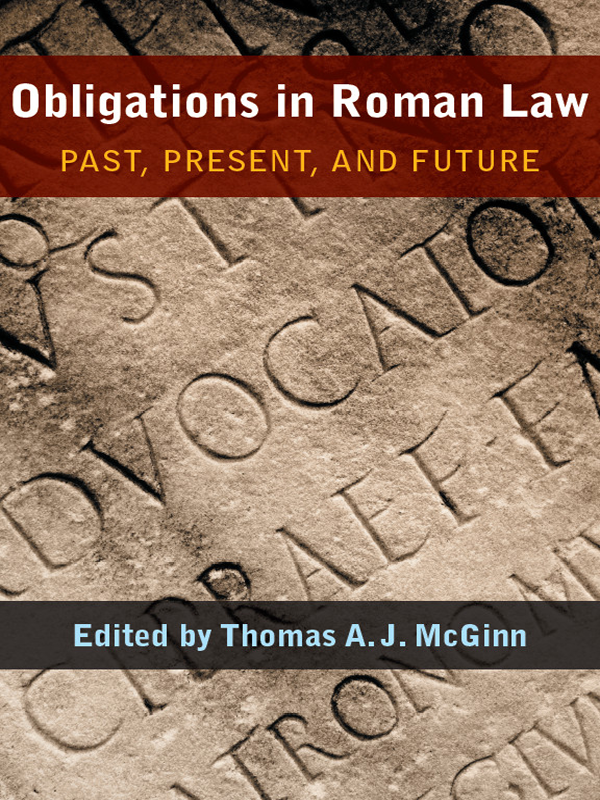 Obligations in Roman Law: Past, Present, and Future

You do not have access to this book. How to get access.
Long a major element of classical studies, the examination of the laws of the ancient Romans has gained momentum in recent years as interdisciplinary work in legal studies has spread. Two resulting issues have arisen, on one hand concerning Roman laws as intellectual achievements and historical artifacts, and on the other about how we should consequently conceptualize Roman law.

Drawn from a conference convened by the volume's editor at the American Academy in Rome addressing these concerns and others, this volume investigates in detail the Roman law of obligations—a subset of private law—together with its subordinate fields, contracts and delicts (torts). A centuries-old and highly influential discipline, Roman law has traditionally been studied in the context of law schools, rather than humanities faculties. This book opens a window on that world.

Roman law, despite intense interest in the United States and elsewhere in the English-speaking world, remains largely a continental European enterprise in terms of scholarly publications and access to such publications. This volume offers a collection of specialist essays by leading scholars Nikolaus Benke, Cosimo Cascione, Maria Floriana Cursi, Paul du Plessis, Roberto Fiori, Dennis Kehoe, Carla Masi Doria, Ernest Metzger, Federico Procchi, J. Michael Rainer, Salvo Randazzo, and Bernard Stolte, many of whom have not published before in English, as well as opening and concluding chapters by editor Thomas A. J. McGinn.