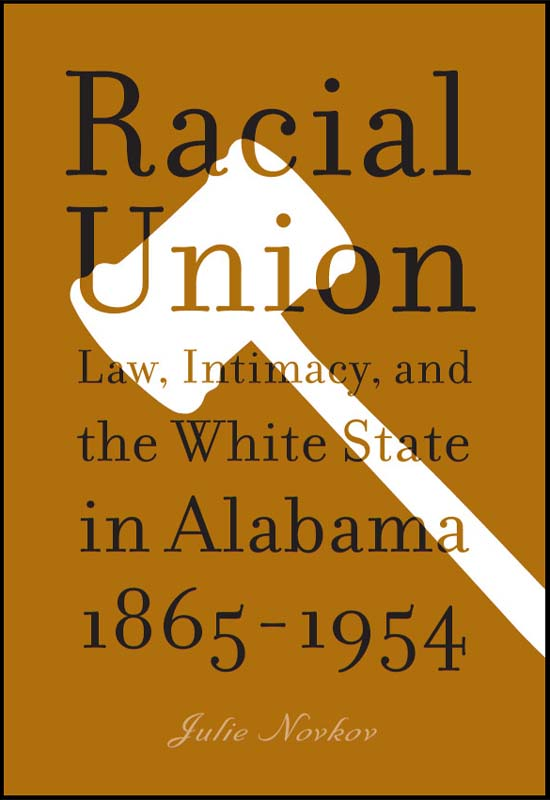 You do not have access to this book. How to get access.
In November 2001, the state of Alabama opened a referendum on its long-standing constitutional prohibition against interracial marriage. A bill on the state ballot offered the opportunity to relegate the state's antimiscegenation law to the dustbin of history. The measure passed, but the margin was alarmingly slim: more than half a million voters, 40 percent of those who went to the polls, voted to retain a racist and constitutionally untenable law.

Julie Novkov's Racial Union explains how and why, nearly forty years after the height of the civil rights movement, Alabama struggled to repeal its prohibition against interracial marriage---the last state in the Union to do so. Novkov's compelling history of Alabama's battle over miscegenation shows how the fight shaped the meanings of race and state over ninety years. Novkov's work tells us much about the sometimes parallel, sometimes convergent evolution of our concepts of race and state in the nation as a whole.

"A remarkably nuanced account of interlocked struggles over race, gender, class and state power. Novkov's site is Alabama, but her insights are for all America."

"Hannah Arendt shocked Americans in the 1950s by suggesting that interracial intimacy was the true measure of a society's racial order. Julie Novkov's careful, illuminating, powerful book confirms Arendt's judgment. By ruling on who may be sexually linked with whom, Alabama's courts and legislators created a racial order and even a broad political order; Novkov shows us just how it worked in all of its painful, humiliating power."