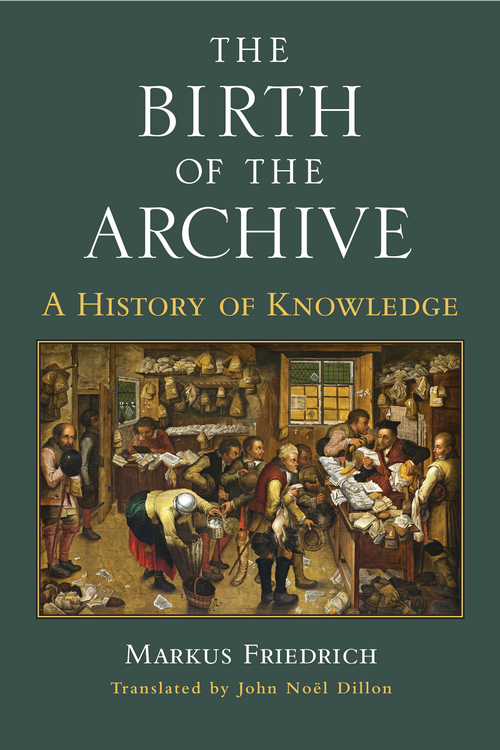 The Birth of the Archive: A History of Knowledge

You do not have access to this book. How to get access.
The Birth of the Archive traces the history of archives from their emergence in the Late Middle Ages through the Early Modern Period, and vividly shows how archives permeated and fundamentally changed European culture. Archives were compiled and maintained by peasants and kings, merchants and churchmen, and conceptions of archives were as diverse as those who used them. The complex, demanding job of the archivist was just as variable: archivists might serve as custodians, record-keepers, librarians, legal experts, historians, scholars, researchers, public officials, or some combination thereof; navigating archives was often far from straightforward. The shift of archival storage from haphazard collections of papers to the methodically organized institutionalized holdings of the nineteenth century was a gradual, nonlinear process.

Friedrich provides an essential background to the history of archives over the centuries and enriches the story of their evolution with chapters on key sociocultural aspects of European archival culture. He discusses their meaning and symbolism in European thought, early modern conceptions of the archive's function, and questions of access and usability. Exploring the close, often vexed relationship between archives and political power, Friedrich illustrates the vulnerability of archives to political upheaval and war. He concludes with an introspective look at how historians used their knowledge of and work with archives to create distinct representations of themselves and their craft.

The Birth of the Archive engages with scholarship in political history, the history of mentalities, conceptions of space, historiography, and the history of everyday life in early modern Europe. It has much to offer for specialists and scholars, while the jargon-free prose of this translation is also accessible to the general reader.