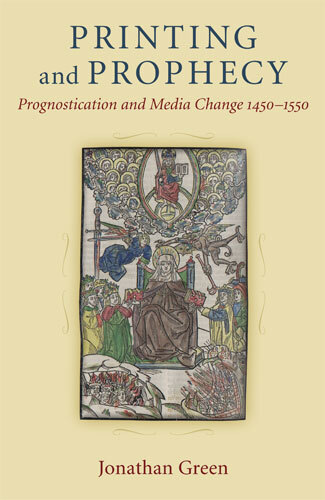 OPEN ACCESS
Printing and Prophecy: Prognostication and Media Change 1450-1550 examines prognostic traditions and late medieval prophetic texts in the first century of printing and their effect on the new medium of print. The many prophetic and prognostic works that followed Europe's earliest known printed book---not the Gutenberg Bible, but the Sibyl's Prophecy, printed by Gutenberg two years earlier and known today only from a single page---over the next century were perennial best sellers for many printers, and they provide the modern observer with a unique way to study the history and inner workings of the print medium. The very popularity of these works, often published as affordable booklets, raised fears of social unrest. Printers therefore had to meet customer demand while at the same time channeling readers' reactions along approved paths. Authors were packaged---and packaged themselves---in word and image to respond to the tension, while leading figures of early modern culture such as Paracelsus, Martin Luther, and Sebastian Brant used printed prophecies for their own purposes in a rapidly changing society.

Based on a wide reading of many sources, Printing and Prophecy contributes to the study of early modern literature, including how print changed the relationship among authors, readers, and texts. The prophetic and astrological texts the book examines document changes in early modern society that are particularly relevant to German studies and are key texts for understanding the development of science, religion, and popular culture in the early modern period. By combining the methods of cultural studies and book history, this volume brings a new perspective to the study of Gutenberg and later printers.