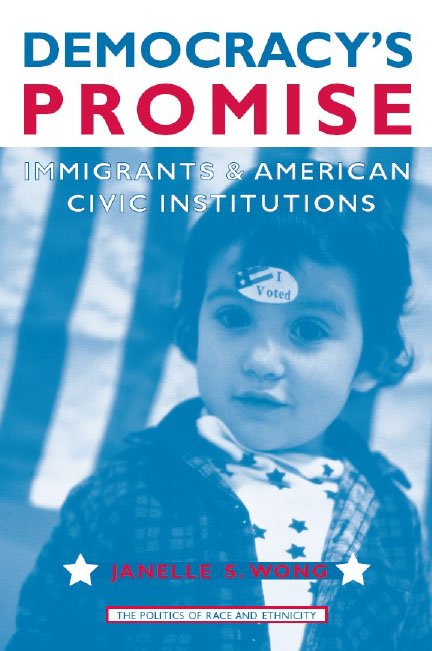 You do not have access to this book. How to get access.
Given the massive demographic changes in the United States during the past few decades, understanding the place of immigrants in the public sphere has never been more critical. Democracy's Promise examines both the challenges and opportunities posed to American civic institutions by the presence of increasing numbers of immigrants. Author Janelle Wong argues that the low levels of political participation among contemporary immigrants are not due to apathy or preoccupation with their homeland, but to the inability of American political parties and advocacy organizations to mobilize immigrant voters. Wong's rich study of Chinese and Mexican immigrants in New York and Los Angeles complements traditional studies of political behavior and civic institutions while offering a nuanced examination of immigrants' political activity.

Janelle Wong is Assistant Professor of Political Science and American Studies and Ethnicity at the University of Southern California.

"As political parties (perhaps) decline in the United States, as civic organizations (perhaps) move away from direct participatory politics, and as the number of immigrants certainly increases--what will link new Americans to the political realm? Janelle Wong answers this important question clearly, with elegance, nuance, rich description, and galvanizing provocativeness. Her evidence is compelling and her sense of urgency about the need for parties to look beyond short-term interests even more so."

"Wong draws on the Latino and Asian immigrant experience, with specific examples from the Chinese and Mexican communities of New York and Los Angeles, to show how the political parties have largely failed to organize these groups and why labor unions and immigrant advocacy organizations have stepped in to take their place. Far from 'disuniting' America, she clearly shows that bringing these groups into the political fray is central to the project of renewing American democracy."

"A scathing critique of the role of parties in the mobilization of new immigrants and an invaluable analysis of alternative pathways of mobilization through community organizations."

"By employing multiple empirical methods, including in-depth interviews and sophisticated survey analyses, Janelle Wong provides a compelling account of the political activities and allegiances of America's Asian and Latino immigrants that challenges much conventional wisdom. Often the political parties are failing to reach out to these groups, and often immigrants remain concerned about their home countries; but they are nonetheless increasingly active in American politics, in ways that may do much to shape the course of American political development in the 21st century. Democracy's Promise is a major contribution to our understanding of this crucial dimension of American politics."

"Democracy's Promise challenges political parties to reexamine their priorities for mobilizing new voters, and identifies the critical role civic institutions play in invigorating participation among immigrant citizens. Wong's analysis is at once precise and expansive; illuminating the contours of Latino and Asian American political incorporation and provoking thoughtful debate on inclusion in democratic theory."