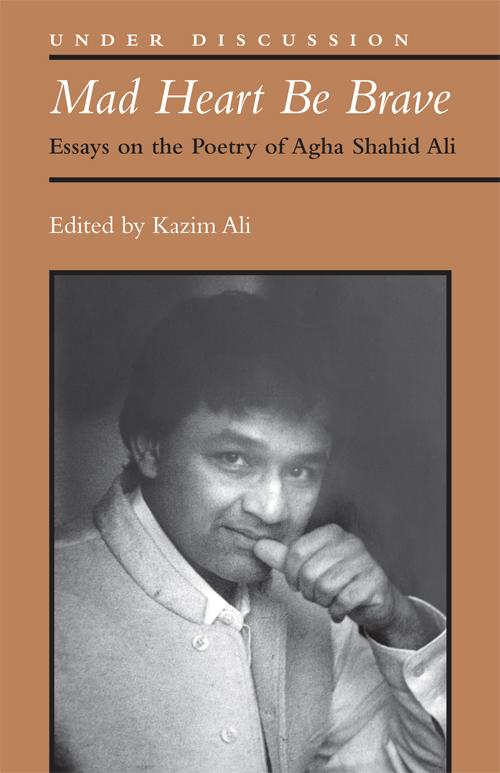 Mad Heart Be Brave: Essays on the Poetry of Agha Shahid Ali

Kazim Ali, Editor 2017
Born and raised in Kashmir, Agha Shahid Ali (1949–2001) came to the United States in the mid-1970s to pursue graduate study in literature; by the mid-1980s, he had begun to establish himself as one of the most important American poets of the late 20th century.

Mad Heart Be Brave: On the Poetry of Agha Shahid Ali is the first comprehensive examination of all stages of his career, from his earliest work published in India but never reissued in the U.S., through his seven poetry volumes from American publishers, ultimately collected as The Veiled Suite. The essays, written by a range of poets and scholars, many of whom knew and studied with Ali, consider his early free verse poetry; his transition into writing more formalist poetry; his correspondence with poets Anthony Hecht and James Merrill; his literary engagement with the political realities of contemporary Kashmir; his teaching and mentorship of young poets; and Ali's championing of the ghazal, a traditional Eastern poetic form, in English. Some essays have a predominantly scholarly focus, while others are more personal in their tone and content. All exhibit a deep appreciation for Ali's life and work.